The main complaints of Ukrainians at the border: queues, roads, slow systems 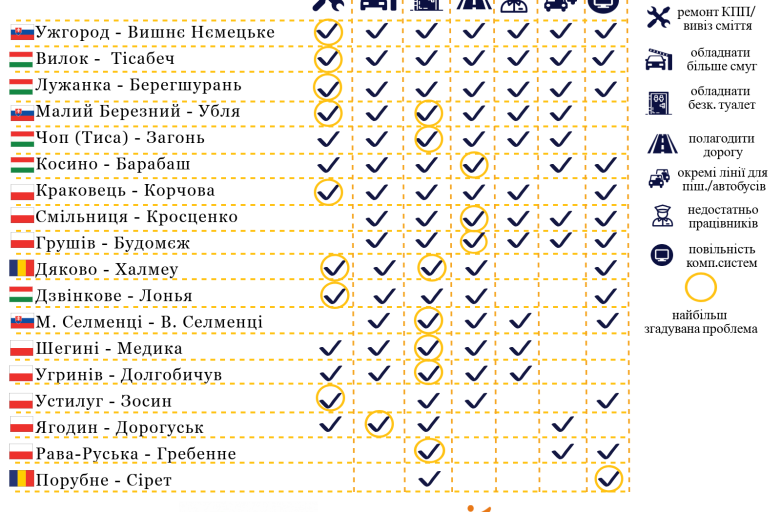 This is evidenced by the results of the survey conducted by “Europe without Barriers” within the framework of the project “Anatomy of the Border”.

“One of the issues that troubled Ukrainians the most during crossing the border was the issue of queues. Although border crossing at each checkpoint may take up no longer than half an hour, the average duration of the procedure is substantially longer,” said Kateryna Kulchytska, an analyst of the organization.

According to respondents, the average duration of border crossing at the checkpoint “Krakivets” (Poland border) was 5 hours, which is the highest indicator in the study. The duration of crossing the border depends on many factors such as workload, the availability of separate passes for buses, equipped pedestrian crossings, quality of the road, control procedure. Thus, the average duration of border crossing is lower at “Smilnytsya” BCP where the joint control of the Ukrainian and Polish border guards is functioning, as well as at the “Grushiv” checkpoint, partially due to the poor condition of the road leading to it.

One of the most common complaints was the absence of toilets or availability of only paid ones, their extremely poor condition. Respondent complained to this factor at all 18 border crossing points (BCPs) without exception.

The second most often mentioned problem was the poor state of buildings of check point, littered territory. Respondents on 13 of 18 checkpoints complained, but practically on each one it was a mass complaint.

At 15 of 18 points respondents expressed their wish to equip additional lanes at the checkpoint.

See also: Survey: corruption on border is faced everywhere, but more on Ukrainian side

Relatively less – from 10 to 13 points – was the amount of complaints about insufficient number of personnel, absence of separate lines for buses or pedestrians, slow work and freezing of computer systems. Considering the last one, the leader in the number of complaints was the crossing point of Porubne-Siret on the border with Romania.

Basing on the results of the survey, “Europe without Barriers” experts ranked border crossing points by evaluating the friendlyness and comfort of the procedure. According to the assessment, 18 points were divided into three groups – Friendly, Neutral, Controversial. The assessment criteria were

4) respondents’ responses about the friendlyness of the checkpoint staff and

5) the convenience of the infrastructure

The survey was conducted on 18 border crossing points on borders between Ukraine and Poland, Slovakia, Hungary, Romania in April-May 2018 in the framework of the Anatomy of the border project, implemented by Europe without Barriers and supported by International Renaissance Foundation.