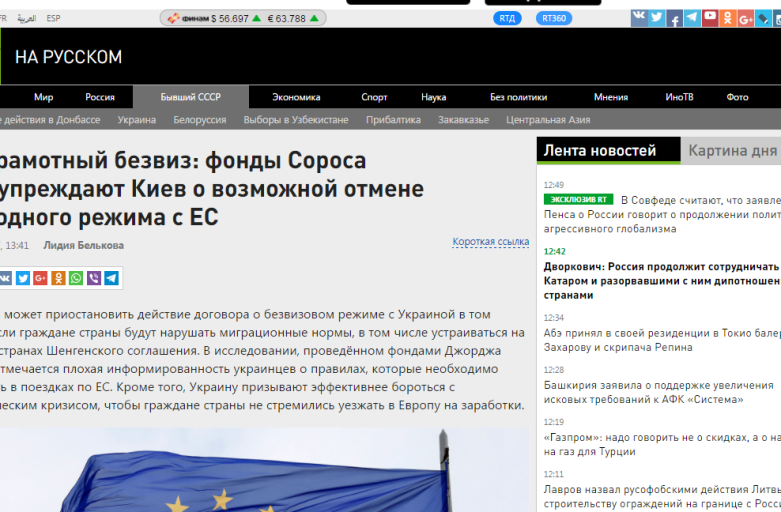 On 5 June Russian TV-channel RT (ex-Russia Today) on its web-site published an article called “Illiterate visa-free: Soros’s Foundations warned Kyiv of possible cancellation of visa-free regime with the EU” (Russian version, Spanish version) which contains significant factual errors and is based on a distorted sense of the analytical report “Irregular and forced migration from Ukraine to the EU on the eve of visa-free regime” conducted by NGO “Europe without barriers”.

“Europe without barriers” declares that this text has nothing to do with reality, except for some statistical data taken out of context. It is manipulative and unbalanced.

Here are some examples of errors and manipulations from the text:

We believe that it is not even outrageous but ridiculous. It is ridiculous that while trying to make fun of “ignorance” of Ukrainians, Russian resource – the maintenance of which annually costs hundreds of millions of dollars – gets confused in such basic facts as the list of “visa-free” countries. It is ludicrous how meticulously the authors looked for the smallest details to make a negative image, but missed the “elephant” attributing authorship to the Foundation which supported the study. It is funny how extremely neutral they describe a photo of Polish far-right meeting “against migrants from Ukraine”. One can only imagine how would be described such an event if it took place in Ukraine.

“This article is the agony of Russian propaganda which has exhausted its usual methods of lies and distortions concerning visa free regime between Ukraine and the EU. Now  it desperately tries to find at least some cause for depreciation of Ukraine’s important foreign policy achievement. At the same time it can not but rejoice that the employees of the Russian propaganda found time and opportunity to read the study which was published only in Ukrainian and English. Maybe eventually they will learn any foreign language and discover the world outside Russia, as well as journalistic standards and democratic institutions. And will learn to include reference» – commented CEO of NGO “Europe without Barriers» Iryna Sushko.