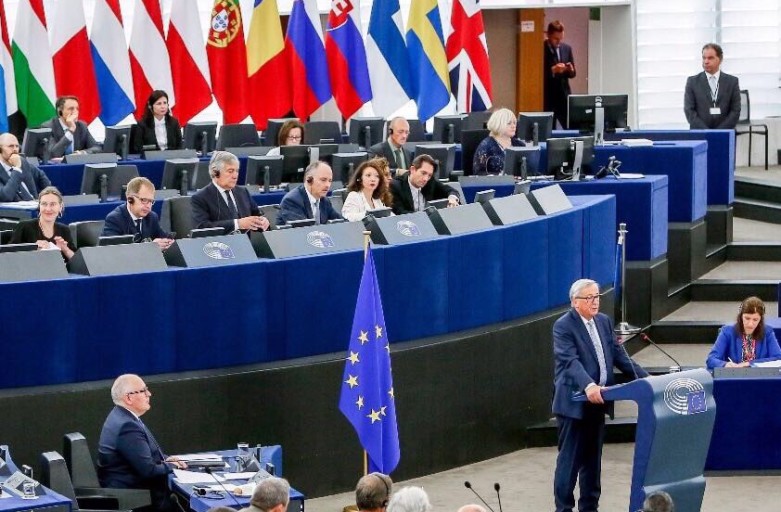 On September 13, 2017 President of European Commission Jean-Claude Juncker has delivered State of the Union Address. We have chosen main points relating issues of freedom of movement in the EU. Quoted by publication on EC website.

Migration was mentioned among five priorities

Migration will stay on our radar.

We have managed to stem irregular flows of migrants, which were a cause of great anxiety for many. We have reduced irregular arrivals in the Eastern Mediterranean by 97% thanks our agreement with Turkey. And this summer, we managed to get more control over the Central Mediterranean route with arrivals in August down by 81% compared to the same month last year.

In doing so, we have drastically reduced the loss of life in the Mediterranean. Tragically, nearly 2,500 died this year. I will never accept that people are left to die at sea.

I cannot talk about migration without paying strong tribute to Italy for their tireless and noble work. This summer, the Commission again worked closely together with Prime Minister Paolo Gentiloni and his government to improve the situation, notably by training the Libyan Coast Guard. We will continue to offer strong operational and financial support to Italy. Because Italy is saving Europe’s honour in the Mediterranean.

We must also urgently improve migrants’ living conditions in Libya. I am appalled by the inhumane conditions in detention or reception centres. Europe has a collective responsibility, and the Commission will work in concert with the United Nations to put an end to this scandalous situation that cannot be made to last.

Even if it saddens me to see that solidarity is not yet equally shared across all our Member States, Europe as a whole has continued to show solidarity. Last year alone, our Member States resettled or granted asylum to over 720,000 refugees – three times as much as the United States, Canada and Australia combined. Europe, contrary to what some say, is not a fortress and must never become one. Europe is and must remain the continent of solidarity where those fleeing persecution can find refuge.

I am particularly proud of the young Europeans volunteering to give language courses to Syrian refugees or the thousands more young people who are serving in our new European Solidarity Corps. They are bringing European solidarity to life.

We now need to redouble our efforts. Before the end of the month, the Commission will present a new set of proposals with an emphasis on returns, solidarity with Africa and opening legal pathways.

When it comes to returns: people who have no right to stay in Europe must be returned to their countries of origin. When only 36% of irregular migrants are returned, it is clear we need to significantly step up our work. This is the only way Europe will be able to show solidarity with refugees in real need of protection.

Solidarity cannot be exclusively intra-European. We must also show solidarity with Africa. Africa is a noble and young continent, the cradle of humanity. Our €2.7 billion EU-Africa Trust Fund is creating employment opportunities across the continent. The EU budget fronted the bulk of the money, but all our Member States combined have still only contributed €150 million. The Fund is currently reaching its limits. We know the dangers of a lack of funding – in 2015 many migrants headed towards Europe when the UN’s World Food Programme ran out of funds. I call on all Member States to now match their actions with their words and ensure the Africa Trust Fund does not meet the same fate.

We will also work on opening up legal pathways. Irregular migration will only stop if there is a real alternative to perilous journeys. We are close to having resettled 22,000 refugees from Turkey, Jordan and Lebanon and I support UN High Commissioner Grandi’s call to resettle a further 40,000 refugees from Libya and the surrounding countries.

At the same time, legal migration is a necessity for Europe as an ageing continent. This is why the Commission made proposals to make it easier for skilled migrants to reach Europe with a Blue Card. I would like to thank the Parliament for your support and I call for an ambitious and swift agreement on this important issue.

In a Union of equals, there can be no second class workers. Workers should earn the same pay for the same work in the same place. This is why the Commission proposed new rules on posting of workers. We should make sure that all EU rules on labour mobility are enforced in a fair, simple and effective way by a new European inspection and enforcement body. It seems absurd to have a Banking Authority to police banking standards, but no common Labour Authority for ensuring fairness in our single market. We will create one.

If we want to strengthen the protection of our external borders, then we need to open the Schengen area of free movement to Bulgaria and Romania immediately. We should also allow Croatia to become a full Schengen member once it meets all the criteria.

We are now protecting Europe’s external borders more effectively. Over 1,700 officers from the new European Border and Coast Guard are now helping Member States’ 100,000 national border guards patrol in places like Greece, Italy, Bulgaria and Spain. We have common borders but Member States that by geography are the first in line cannot be left alone to protect them. Common borders and common protection must go hand in hand.