Russian president misleads his audience regarding visa waiver for Ukraine 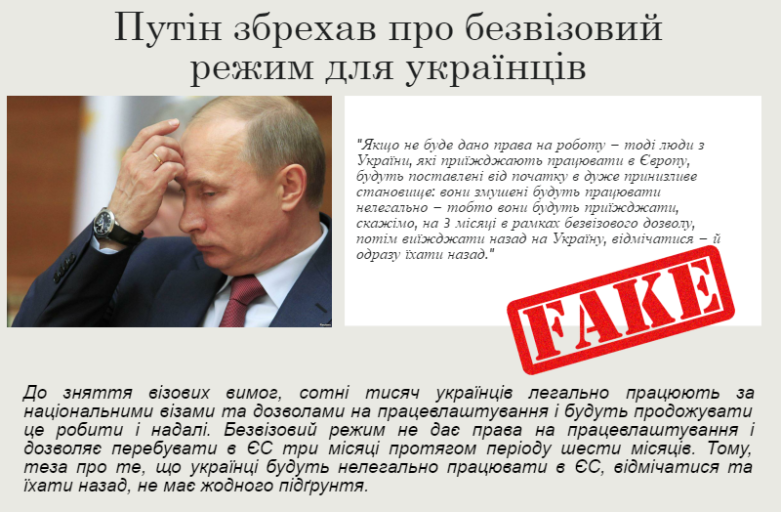 Russian President Vladimir Putin said during the final Annual Conference on December 23 that generally supports the visa-free regime with the EU for Ukraine, but said that visa-free bring risks of illegal labor migration from Ukraine to the EU.

“So the question is, will the inflow of Ukrainian workers increase anyway? It certainly will. In Russia, according to preliminary data alone, there are 3 million Ukrainians. If they can go to Europe without a visa and earn a little more, people will certainly try to move there, even from Russia, let alone from Ukraine. This will put a serious burden on the labor market in Europe.

Why is this a manipulation

The visa-free regime does not give the right to work in the EU even within the allowed 90-day period of stay. It is true.

The most significant distortion here is that even if some Ukrainians wanted to work in the EU illegally, they would not be able to follow scheme described by the Russian president. Visa waiver grants right to stay on the EU’s territory only for 90 days within the 180-day period.

Under these conditions, it is impossible “to arrive, say, for three months under the visa-free agreement, then go back to Ukraine, check in and go back immediately.” Such travelers just would not be allowed to cross the EU border until next three months would pass (in case EU border guards do not know about the illegal job of the traveler).

Instead, Putin’s words are describing earlier Russia’s practice applicable for Ukrainian workers and other “visa-free” foreigners when one needed to leave Russia every 90 days to “check in” and immediately get back to extend right to stay in the country.

On January 1, 2014, Russia imposed for visa-free categories of foreigners the rule 90/180, the same as in the EU and Ukraine.

Words of Vladimir Putin are manipulative and designed, on the one hand, to distort the understanding of mechanism of visa-free regime with the EU (possibly to create the impression that illegal work in EU easy), and, on the other hand, to create excessive fear of illegal labor migration from Ukraine in the EU.

Ukrainian Migration in Time of Crisis: Forced and Labour Mobility