“Europe without barriers” found out the reasons and explained “discrimination” of foreigners in the first days of the war, including citizens of India and African countries 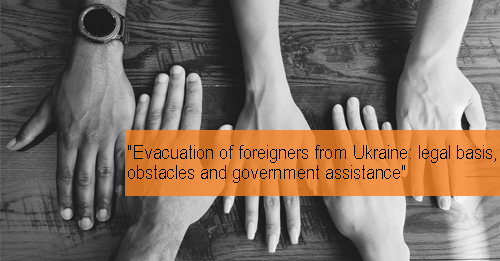 Ukraine once again proved its “europeanness” by complying with all norms of international human rights law even in war conditions. Ukrainian government prioritized everybody while organizing and carrying out the evacuation of both its own and foreign citizens from war zones.

These are the results of the analytical study “Discrimination of the foreigners rights during evacuation from Ukraine”, commissioned by the non-governmental organization “Europe without barriers”.

According to the combined data of the United Nations and the Ministry of Foreign Affairs of Ukraine, that appear in the study, more than 180 thousand foreigners left the territory of Ukraine in the period from February 22 to March 6, 2022.

In order to evacuate these people as soon as possible and as efficiently as possible, the Ukrainian government, state authorities and public organizations created an emergency hotline and online support forms which could be used to get advice on the means and ways available for departure; the procedure for crossing the border has been simplified for persons who did not have visas and, therefore, the right to stay in the countries of the European or Schengen Union; round-the-clock operation of all checkpoints on the western border was ensured, as well as separate evacuation and “green” corridors from the places of hostilities and directly at the checkpoints, respectively.

Undoubtedly, the implementation of each of these measures required the consolidated work of a large number of Ukrainian institutions and agencies, the search for the necessary financial, material and technical resources, technically round-the-clock interaction of the Ministry of Foreign Affairs with the diplomatic missions of almost all countries of the world, and after all – a certain amount of time.

It is not surprising that it is precisely during the period of solving all mentioned issues, as well as establishing the work of responsible organizations in new extreme conditions comes to the forefront the largest number of complaints and accusations from individual foreigners, and later – from foreign and international organizations, against the Ukrainian side in discriminating against their guests from other countries.

As showed the results of the study, the reasons that served as a pretext for the incidents that prompted the appearance of such rejections have a completely objective explanation.
1. Normative legal acts that regulate the rules of entry and exit of foreigners to and from the territory of Ukraine do not envisage any advantages and conditions for the priority evacuation of foreigners from Ukraine, which fully complies with the norms of international humanitarian law, that gives priority to women, children and the elderly.
According to eyewitnesses, most of the foreigners did not follow the established rules and demanded special treatment for themselves.

2. EU member states refused to cross the border to persons who had non-Ukrainian or non-European citizenship, as well as did not have visa to enter the territory of EU countries.
The Ministry of Foreign Affairs of Ukraine managed to reach an agreement with the relevant institutions of European countries in just 10 days regarding the provision of temporary protection for up to three years for all Ukrainians and those who had a permanent place of residence in Ukraine before the start of the war, as well as up to three months for those who can return safely to their country of origin.

3. Diplomatic institutions of foreign states, in particular of India and of some African countries, showed extremely low activity in solving the issues of evacuating their citizens.
Citizens of India and some African states left Ukraine by routes provided by the Ukrainian Government after numerous and fruitless appeals to the authorities of mentioned states.

4. The troops of the aggressor country, despite the ceasefire agreement, continued shelling Ukrainian settlements, making it impossible to create safe corridors for citizens to leave Ukraine, including foreign citizens.
Taking into account the precedents of humanitarian corridors shelling, the Ukrainian authorities involved the embassies of certain countries, as well as international organizations, in the process of evacuating citizens, which sometimes led to the postponement of evacuation measures and increased their duration.

Therefore, despite targeted fire in conditions of general panic and chaos, the Ukrainian side managed to organize and systematize the processes of state management and fulfill the assumed obligations to the world community in an extremely short period of time. Ukrainian Government actions and the measures taken had no signs of discrimination in any case and fully and completely corresponded to one of the main european values – the rule of law and equality.

Press office of the NGO “Europe without barriers”