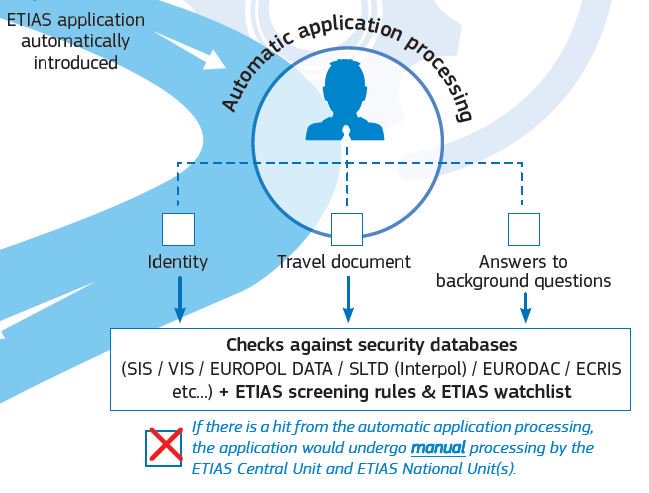 Two new control systems for travelers were considered by the European Parliament last week – the European Travel Information and Authorization System (ETIAS) and the European Entry/ Exit System (EES). Both will start approximately in 2020 and become a strict filter for people who have exceeded their stay in the Schengen area, irregular migrants and criminals. New system of travel permits and system for calculating days of stay in the Schengen zone will be automatic, and programs do not take bribes.

EES – program instead of passport stamp

On October 25 European parliament voted in favor of a new European Entry/ Exit System that should enhance checks at the external borders. The system would replace hand-made passport stamping. Now days of stay in Schengen zone will be counted by a program, not by a border guard.

It would fasten border crossing and simplify detection of persons who overstayed in Schengen zone, as well as detection of documents fraud or identity theft.

New system would gather and keep following information about citizens of non-EU countries who entered Schengen zone: name and surname, travel document (passport) data, fingerprints, photo, date, and place of entry or date of entry denial. Both visa and visa-free travelers’ data will be fixed, including citizens of Ukraine

ETIAS – entry permission instead of visa

After ETIAS system enters into force, Ukrainian citizens will be obliged to submit an online application before visiting EU country. The system will be mandatory for citizens of all “visa-free” countries, e.g., USA, Canada, Australia, Moldova, Georgia, Ukraine – over 60 countries and territories in total.

At the same time some categories of travelers should not register in ETIAS:

–    crew members of ships or aircraft while on duty

To apply traveler should visit website or mobile app of the ETIAS system and fill in the form. It is expected that applying would not require a lot of efforts, and process of filling in the form would take from 10 to 20 minutes.

Also, applicant should inform the system about:

Applicant should be very careful when filling in the form as in case of providing incorrect data application would be rejected. Processing of an application will last from several minutes to 72 hours. Authorization will be valid for 3 years with no limitation on number of trips, but if passport expires before end of authorization term, one should re-authorize with a new travel document.

The first proposal on ETIAS provided authorization fee of 5 euros, but European Parliament MPs changed sum to 10 euros. At the same time some travelers will be exempt from payment:

–    family members of EU citizens or third-country nationals who have right of free movement in the EU (e.g., having residence permit)

–    students and postgraduates traveling with goal of study, accompanying teachers

–    representatives of non-profit organizations aged under 25 who are traveling to take part in seminars, conferences, sport or education events, organized by NPOs

What is important, final decision on entry still will be taken by a border guard. So visitor should be ready to answer questions about goal of visit and documents to confirm it.

ETIAS would sift out people who are prohibited to entry, have committed crimes, use lost or stolen documents.

In case of need, applicant will be asked to provide additional information or in exceptional cases – to have an interview.

If applicant does not answer in time, he will be denied entry permission.

Who else can be denied? People who bring high potential risks of irregular migration or are subjects to any disease with epidemic potential, as well as people with the following records in SIS:

If an applicant is denied entry, system should point reasons for denial and possibilities for appellation. The procedure of appellation is complicated as it will be processed in the EU country that decided to reject the application.

Quiet similar to ETIAS systems are already working in US and Canada, and some elements of such system are planned to be run by Ukraine since 2018.

Thus, we may speak on global trend of strengthening borders using new technologies that make “strengthening” less painful for an average law-abiding citizen who enters another state.  While changes are obviously directed to enhance both personal and state security that is a mandatory condition for free movement, also it is obvious that new barriers appear bringing new risks and restrictions.

Most probably, as these systems develop, issues of personal data protection and acceptable level of state control on citizens’ movement will become sharper. At the same time, old habitual problems of queues, corruption, and improper services would gradually go to the past.